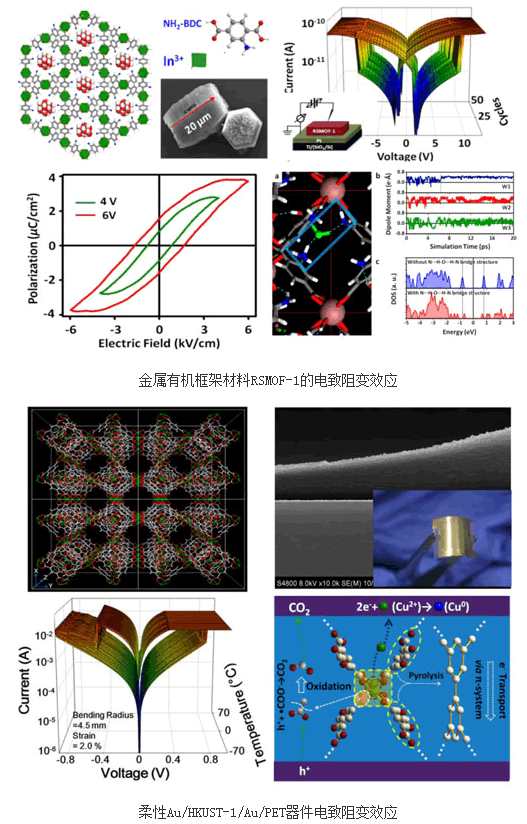 Resistor Random Access Memory (RRAM) based on electro-resistive effect has the advantages of non-volatile, simple structure, low power consumption, high density, fast read and write, and is considered as one of the most promising new storage technologies. At the same time, with the rapid development of wearable electronic devices, the development of flexible electro-resistive materials and flexible resistive memory is particularly worthy of attention.

The research team led by Li Runwei, a researcher at the Chinese Academy of Sciences' Magnetic Materials and Devices Research Institute (Ningbo Institute of Materials Technology and Engineering), separately studied the resistance-reducing effects of inorganic and organic materials and their mechanisms, such as in BiFeO3 [Appl. Phys. Lett. 97, 042101 (2010), ZnO [Adv. Mater., 24, 3941 (2012)], HfO2 [Adv. Funct. Mater. 24, 2110 (2014)], Graphene oxide [Appl. Phys. Lett. 95 , 232101 (2009), J. Mater. Chem. 22, 16422 (2012), Poly-West-Carrageen (PA-TsOH) [J. Am. Chem. Soc, 134, 17408-17411 (2012)] films and other materials In the system, a stable resistive change effect can be obtained by controlling the physical chemical processes such as active metal ions or oxygen ion migration, functional group adsorption/desorption, and organic ion doping through the electric field. Studies have found that although organic materials have uniform resistance to deformation and flexibility, thermal stability is worse than that of inorganic materials; most inorganic materials have better thermal stability, but their on-off ratio and mechanical flexibility are generally inferior to organic materials. material. Recently, the team made a series of advances in the study of the resistance-change effects of organic-inorganic hybrid systems.

The metal-organic framework (MOF) material is an organic-inorganic hybrid crystal framework material in which organic ligands and metal ions or clusters are formed through coordination bonds, and has three-dimensional structure highly ordered, physical properties are stable and adjustable, and the chemical structure is easy to design. Etc. Pan Liang and researcher Liu Gang of the team cooperated with Ningbo University, the Institute of Physics of the Chinese Academy of Sciences, Stockholm University of Sweden, and the University of Michigan, USA to form single crystals of quartz-like metal-organic frameworks formed from metallic indium and terephthalic acid ammonia. In the material (RSMOF-1), a stable electro-resistive effect is obtained by controlling the polarity reversal of the guest water molecules in the electric field frame structure, and the transition voltage and the high and low resistance values â€‹â€‹are uniformly distributed. This research work confirms in principle the possibility of using a MOF material to make a resistive random access memory. Based on the above findings, one Chinese invention patent was applied for (201210177625.6). The paper was published in J. Am. Chem. Soc. 136, 17477-17483 (2014).

It is worth noting that the micro-scale RSMOF-1 single crystal cannot be prepared into a real memory device yet, and the mechanical flexibility cannot be compared with the thin film material. To solve the above problem, the team used a modified liquid phase epitaxy method to fabricate a nano-scale high-quality organic metal frame (HKUST-1) thin film on a flexible Au/PET substrate. The study found that the MOF film material can maintain a uniform resistive characteristics within a wide temperature range of Â±70Â°C. More importantly, during the dynamic bending test, Au/HKUST-1/Au/PET devices It can still maintain stable and reliable storage performance in the 0 to 2.8% strain situation, providing a new material system for exploring flexible memory devices. Based on the above findings, one Chinese invention patent was applied for (201510106614.2). The paper was published as an inside cover article in Adv. Funct. Mater. DOI: 10.1002/adfm.201500449.

Wardmay Bullet IP Camera are prefect use in any business, professional, or home setting where there is need for a Bullet IP Camera. All of our cameras have Day & Night technolgy that allows the camera to switch to black & white mode in low light so the camera can still see. Almost of our Bullet cameras have infrared night vision to see in complete darkness.  With the progress of technology, wardmay has been working to develop and update the latest technology products, will never provide customers with the best latest products.